I am away on vacation April 12 – 17, traveling to the beautiful red rock area of Sedona, AZ.  Hoping to have deep and transcendent meditations in some of the area’s world-famous vortexes while hiking. We shall see!  I am open to the possibilities.

Friday, April 22 is Earth Day 2016, and I would like to invite you to an environmental event I am co-hosting that afternoon. See flyer and links below. Yoga means “union” in Sanskrit, and union can be defined many ways, such as the union of mind, body, spirit when we practice yoga and qigong.  But I view union also as our connection to one another, the planet, and all the planet’s inhabitants.  My personal belief is that practicing yoga extends way beyond the mat (in fact, that is generally the least amount of time we may be practicing yoga). The true practice of yoga is how we consciously engage with one another and the planet that is our home and source of life.  As such, my community work is very much a yogic practice to me; it is my karma yoga (volunteer work or selfless service).  I see a direct relationship between my teaching and practicing yoga and my lifestyle choices, and that includes trying to make environmentally-friendly choices as much as I can – such as refusing to use single-use throwaway plastics like plastic bags and bottles (and that includes no longer buying those “healthy” ready-made green juices that come in plastic bottles, and of course not buying plastic water bottles).

One of the documentaries that inspired me to make these personal lifestyle changes is “Bag It”. Because it is so profound, my neighborhood association is showing the 45-minute version of “Bag It“, followed by a panel, and audience Q and A on Earth Day 2016!  Please join us to learn about  the alarming environmental issue of plastics in our oceans and the health implications to ourselves and the planet, as well as our economies – and what we can all do to confront this growing problem, and turn the current disastrous trend around.  The event will end with a free raffle drawing during which we will give away eco-friendly bags and other prizes! This event is family friendly and is co-hosted by the environmental club of the Trevor Day School, so it is perfect for all ages!See http://www.west80s.org 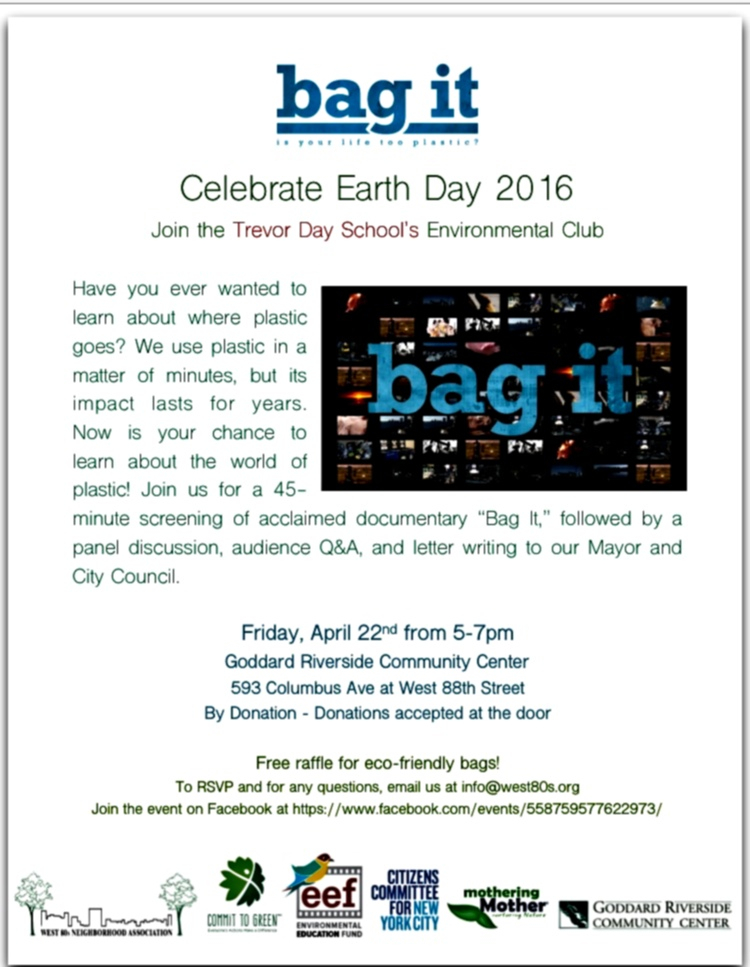 Some sobering facts about plastic:

Did you know it costs NYC approximately $ 10 million per year to transport our single-use throwaway plastic bags to landfills each year, and that New Yorkers use over 5 million plastic bags each year – the majority of which are not recycled.  We have all seen plastic bags stuck in our street trees, clogging storm and sewage drains, and being washed out to our waterways; this creates visual urban blight, harm to animals and marine-life, and contamination of our food system.

A recent local study found that there are at least 165 million particles of plastic floating in the waters surrounding NYC at any given time.  Seehttp://www.nydailynews.com/new-york/waters-nyc-165m-plastic-particles-article-1.2530618
It is estimated that by 2050 if we do not reduce our reliance on fossil-fuel based plastics, there will be more plastic in the oceans than fish.   http://www.usatoday.com/story/news/2016/01/24/oceans-more-plastic-than-fish/79267192/

Find out more about what we can all do locally about this alarming global pollution issue, and learn about the status of NYC’s pending carryout bag legislation by attending my Earth Day event!  See also www.plasticbaglaws.org andwww.bagitnyc.org

Why this yogi is marching in the People’s Climate March

One of the main tenets of yoga is ahimsa – the practice of non-violence and non-harming.  For thousands of years, yogis and spiritual seekers have studied and followed this ethical principle.   As present-day yoga and spiritual practitioners, we continue to study and shape our lives based on ahimsa. Because we understand that the material and spiritual worlds, mind and matter, are connected, we seek non-violence not only in our actions, but also in our words and thoughts. We seek to live in harmonious alignment with one another and Nature.

As such, we cannot ignore the great harms being inflicted upon the Earth and our fellow sentient beings (whether they are personally known to us or not) as a result of man-made climate change. Such harms include the loss of human, animal, and marine lives, as well as damage to property, due to extreme weather patterns, super storms, drought, floods, fires, receding glaciers, and the rising levels and acidification of the oceans.

Climate change is linked to the Industrial Age – present day increase of carbon dioxide in our atmosphere, which is linked to industrialization and the burning of fossil fuels. Many extreme methods are currently being used to extract such fossil fuels from the Earth. Such extreme energy extraction practices include explosive mountain-top removal for coal; “fracking” for methane gas by exploding chemicals, sand and our precious fresh-water into shale rock; and tar sands oil mining.  Drilling by-products, such as toxic frack waste water, are injected deep into the earth through injection drilling wells – linked to toxic water contamination and earthquakes.  These methods are acts of violence against the Earth, and clearly not in harmony with the natural world.

Yoga means “union” and “to join” in Sanskrit. Yogis recognize the underlying unity of life on Earth.  When leaking gas and oil wells pollute groundwater, contaminate farms, and poison animals, we are all harmed.  When an oil rig explodes in the Gulf of Mexico, an oil tanker sinks in Alaska, or a gas well leaks methane and chemicals into a Pennsylvania farmer’s water well, we are all negatively affected – no matter how far we may be living from those communities’ devastation. This is because we see one’s Self in all beings, and we feel compassion for the suffering of others.

And so, at this pivotal time in history, we are called to protect Mother Earth through our karma yoga or seva– compassionate, selfless service to others and the common good.  By volunteering and joining the People’s Climate March, we are joining a movement and a cause greater than ourselves.  With consciousness and compassion for all, we seek to spread the principles of non-violence to the planet.  We seek a sustainable and safe energy policy from our governments, the United Nations, and countries all over the world.  And we seek a life-sustaining society for ourselves and for future generations.

Our current way of life and corporate-influenced government energy policies are no longer life-sustaining. The rapid clear cutting of our forests, and the slashing and burning of our planet’s rainforests are resulting in the rapid loss of our Earth’s “lungs” and the mass extinction of species.  Our planet’s pollinators – bees, Monarch butterflies, birds and bats are currently being threatened and dying off.  Water sources are polluted by man-made toxins and chemicals – many a by-product of the fossil-fuel industry’s extraction practices. There is rapid depletion of our natural resources, leading to population displacement, starvation, and wars. Agricultural areas are reduced. Plastic debris (made from oil and gas) pollutes our oceans. Island nations are at risk due to rising sea levels. Carcinogens, such as benzene, and other volatile organic compounds pollute the air near fracking sites, causing major health issues and emotional trauma.

Because we understand the interconnectedness of life, we cannot accept this devastation to our planet as the status quo. We know this is the time of a global shift in consciousness: the understanding that all is one, and everything is connected. We see that science is beginning to support spirituality in that regard, and vice versa.

So on this historic day, we come from spiritual centers, sanghas, and yoga studios all over the world in defense of Mother Earth and all her inhabitants.  We yogis and spiritual seekers will gather mindfully and peacefully in New York City, focusing our energies together in seeking an enlightened future!

This is the spiritual revolution of our generation. The evolutionary shift has begun. Let’s join together September 21, 2014, and take our spiritual practice off the yoga mats and meditation cushions and bring it to the People’s Climate March!

May the light of all truth overcome all darkness; may the Universe be filled with peace, joy, love, and light – Jai!