October 2014 – Overview of Climate March with Yoga and Spirituality Group

I hope you are 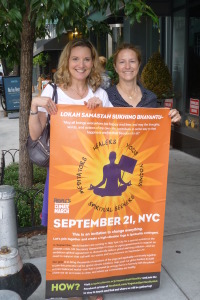 enjoying this beautiful Fall season.  I am headed to Omega for a 5-day retreat, and am looking forward to visually feasting on the vibrant hues of the Hudson Valley’s Fall foliage, and taking long walks in the crisp country air.

Tonight, as I took a break from packing, I uploaded my photographs from the People’s Climate March this September 21 in NYC.  It is hard to believe that less than a month ago, 400,000 people from all over the world came together to march peacefully in defense of clean energy policies, and a non-toxic, safe, and democratic planet.  Organizers had expected ¼ of the attendance, and the crowds were so large that those of us who were gathering towards the end of the waiting areas along Central Park West did not start actually walking until after 2 pm – over 2.5 hours from the start of the March at Columbus Circle, where UN Secretary Ban Ki-Moon was marching alongside Mayor DeBlasio, Al Gore, Leonardo DeCaprio, and my personal favorite, the anti-fracking activist and lovely actor Mark Ruffalo.  Indigenous people were part of the groups leading the March, a large number of City Council members marched at some point behind them.  Labor unions and inter-faith groups gathered in large numbers, and were involved in the organizing of the March from early in its’ inception.  What struck me as I spent the day walking amidst the colorful crowds was how diverse the March was in all respects.  It was a true melting pot of humanity, and an example of how people from all walks of life can peacefully join together and act towards a common goal – and yet have diversity within those goals too.  There were many anti-fracking signs, divest from fossil fuel banners, flood wall street art, signs promoting socialism, marchers seeking a ban on mountain top removal coal mining, marchers carrying flowers and seeking protection for the bees and butterflies, beautiful artwork depicting the planet, puppets embodying the greed and destructive practices of certain corporations, people seeking climate justice for island nations and victims of hurricanes, protestors seeking bans on oil and gas pipelines and LNG ports, posters demanding clean, renewable energy policies and implementation, and so much more!

The Yoga & Spirituality Contingent started our March with a powerful meditation at 10 am.  At that early hour, we were a small group of six who sat in a circle on West 83rd Street and Central Park West listening to the Sri Shankar meditation that was being broadcast all over the world simultaneously on cellphones!  It was a very beautiful meditation for peace and unity, as Sept. 21 was also World Peace Day.  After our meditation, the crowds started forming and our group was joined by many of you – yoga practitioners from many studios and ashrams, such as Integral Yoga Institute, Sivananda Yoga, World Yoga, UWS Yoga & Wellness, and others.  Some people had instruments and we created a large circle on the street for a high energy “call and response” kirtan.  In keeping with the democratic theme of the People’s Climate March, we took turns leading chants and even my Omega friend, Izzie, who happened to be walking by joined in to lead a 60s’ song!  We sang, danced and chanted until everyone began lining up preparing to walk.  Then came the 2-minutes of silent contemplation for the victims of climate change.  The energy was intense as hundreds of thousands of people stood still with hands raised over head and joined together in mindfulness.  The stillness was moving and profound;  it felt as if we were all breathing as one.  After our 2-minutes of silence, a wave of sounds started from the front of the march and cascaded to the back in beautiful discordant harmony.

In Sanskrit, the ancient language of yoga, Yoga means “union” and “to join”.  Yogis recognize the underlying unity of life, the interconnectedness of all, and that we are One.  At this pivotal time in history, spiritual practitioners, joining with political, environmental and social activists, and others, and are being called in many ways to protect Mother Earth.  One such way, was on September 21, 2014, when we left the yoga studios, meditation centers, and ashrams and marched on the streets of NYC, joining our voices with hundreds of thousands of others in seeking government and corporate energy policies harmonious with the planet and all beings.  On that historic day, many of us felt more connected to one another, to the earth, and to our true selves as we joined this vibrant example of the best of humanity.

It was a March filled with such beautiful and creative art, joyful music, festive colors, and good vibes that it was almost hard to believe we were basically marching for our future and next generations’ futures.  Usually, contemplating the seriousness of what humanity is facing is discouraging.  That people still have to advocate for their rights to clean water, land and air, and now additionally to prevent climate catastrophe is daunting.  Yet, on this very special day, the mood was so positive and elevated, it made one feel that real, positive change is possible.  The People’s Climate March was Day One towards a better future.  It has changed the conversation, and now we will continue with our next “steps” on the long and every day march towards a just and safe future.